Went down to Barefaced Stories at The Bird (Perth WA) last night and told the story of the first chapter.
The real story.
The first chapter is, of course, pure fiction.
Here it is:

The man on me moves.
I lie still.
He moves again. Maybe he’s embarrassed to be murdering a sobbing, bleeding, blubbering man who has no power, no strength, no will, no future. He rolls off me. I squeeze my eyes. Lungs suck great chunks of air. I hear him stand and walk away. I don’t know where to but I hope it’s far, so far I can’t see him when I get up off this floor because then I might stumble down the stairs to the kitchen, take one of the houseboy’s long knives, walk up the stairs to his room, open his door, find him lying on his bed exhausted from the attempted murdering and stick him – stick the knife into his musclebound body more than once, maybe as many times as the murder I heard about on Radio Australia last week when one man stabbed another to death because of a sweet potato deal gone sour.
I turn my head to the floor. The crying spreads. I am emptying, pouring out, everything is leaving me. I know that if I cry long enough and hard enough there will be nothing left but a wet patch of tears mixed with blood, and when he comes out of his room to check on me, or someone climbs the stairs, all they will see is a small pool of what was once me.


You can read another coupld of chapters on the Fremantle Press site.
Posted by Jon Doust at 7:30 PM No comments:

Charlie Lehman speaks about To the Highlands at the Albany launch
Posted by Jon Doust at 8:34 AM No comments:


no sleep.
too much happening inside.
the Albany Town Hall glowed and pulsed.
the sound and light boys - Mark Pemberton, Dave Nile and Victor O'Connor - did a magnificent job.
the music boys - Rod Vervest, Bob Lapinski, Craig Sinclair - sang from their souls.
the readers - Simon Woodward, Rachael Rastrick - read with their lives on their sleeves.
Lester Coyne was humorous and regal.
the MC - Simon Simon John Smale - was perfect.
Andrew Wenzel was deep, meaningful and cuddly.
the wine - FAT TIRE, Oranje Tractor - was surperb (so said the drinkers).
the food from Karin Marsland at 14 Peels Place was better than home cooking.
and Charlie Lehman spoke with insight and compassion.
the author? well, he did what he does.
many thanks to the city of Albany and Adam Cousins, Brian at Albany Amcal, Garth at Solomon Merchant and Paul at IGA Albany.
you can't do this stuff without help.
if you've never been to Albany,Western Australia, this is how it is, just like a multitude of small communities on the planet.
if only we could stay small and stay connected.

One question constantly asked is: Are you Jack Muir, the protagonist of your two novels, Boy on a Wire and To the Highlands?
The answer is: No.
Jack is a character in two books. I am a living human being.
Do our lives bare any comparison? Yes, they do.
I was made to join a bank because I failed school and the bank sent me to the Pacific, specifically, Papua and New Guinea.
After one year I came home a bloody mess and within two months my entire life had collapsed and my doctor supplied me with powerful medications.
Jack Muir is forced to join a bank because he failed school and he is then sent to an unnamed Pacific island where his life plummets and he has a breakdown.
My breakdown certainly changed my life.
Will it change Jack's?
We all hope so and a number of readers have yelled at me: Jon, give the poor bugger a break. How much misery can you pile on a bloke? For god's sake, can we have a happy ending in the next book?
But that's the way, often, isn't it, the only way a bloke will change is if you pile on the pressure. Jack has  been a bit slow coming to terms with his true self, he's been living a lie, so I had to lay it on hard, fast and thick.
Don't think for a minute I don't love the fella, I do. He's the son I should have had, my father might have said if he'd lived long enough to meet Jack.
Here's the promise: The next novel in the trilogy will have a happy ending.
I can do nothing more.

During this book launching process a number of publications have sent me questions. Once they have appeared, I will copy them here.


How do you describe To the Highlands?
It is the second in a trilogy about the life of Jack Muir, now a reluctant employee of The Colonial Bank of Australia and dispatched to an unnamed colonial outpost somewhere in the Pacific to the north of Australia. It’s 1968 and the western world is at odds with itself.

Where does it compare with Boy on a Wire? How’s Jack changed and grown since readers last saw him?
Jack is still Jack ─ witty, battling the bullies, grappling with questions he doesn’t understand. In Boy on a Wire he was often the victim of others, of outside forces. Now he’s a young man and making his own choices. Badly. There are still pressures, of course, but Jack has lost his way.

Boy on a Wire is most often described as a “dislocated memoir”. Being a sequel, to what extent is the same true of To the Highlands?
Also true, but I have taken greater license in To the Highlands. It is based on a year I spent in Papua New Guinea, a year I did not spend wisely and during which I was often “tired and emotional”.

It’s no secret that Jack Muir is, more or less, you. Does it take a lot of bravery to share some of these stories in a book?
Indeed. The books I write are very personal and leave me exhausted, bruised, yet smiling a faint, knowing smile.


Can you tell me a little about the significance of the setting – 1960s Papua New Guinea?
1968 was a mad and crazy year. For those who were never there, or cannot remember, let me remind: Robert F Kennedy and Martin Luther King were assassinated; an attempt was made to assassinate Charles de Gaulle; Russia invaded Czechoslovakia; students rioted in London, Paris, New York, Chicago; The Beatles split up. One very important issue students always seemed to hold high was what they called “Free Love”, the freedom to have sex without wedlock. Gen Y would laugh their heads off if they knew Baby Boomers had to fight for such a right.

You pay tribute to Randolph Stow’s To the Islands in your title and acknowledgements. What influence did his work have on yours?
To the Highlands was not a book I had planned but then I read Stow’s To The Islands and re-read Joseph Conrad’s Heat of Darkness and I knew I had to get my own year of living darkly off my chest.

Boy on a Wire saw your name pop up on the Miles Franklin long list and attracted quite a bit of praise. Do you worry about the expectations around its follow-up?
It did make it hard to get started, to believe I had more than one book in me. I have a hope that this book will do well enough for people to begin referring to me as “the new Craig Silvey”.

How would you describe your writing process?
At the start, intensely disciplined. I go at it as though I have a job. I set myself targets, goals, timelines and because I am then the opposite of my natural self – which my partner would describe as chaotic – I become dysfunctional around the house. Once I have the first draft I revert to type and write and re-write on inspiration.

Does your partner read your books? (I’m asking this because of the “is it because his partner has said she is not sure she wants to read it?” part of your blog.)
Ms Doust only reads a book after everyone else in the known universe has read it, all the reviews are in and Mr Doust has left the house on an extended holiday.

What do you hope readers will take away from it or get out of it?
I hope they will take something, anything, but in particular that they will understand Jack, empathise with him and know his pain and the pain of young men like him in a brutal and unkind world. I also hope they will be both amused and disgusted in the appropriate places.
Posted by Jon Doust at 11:28 PM No comments:

This book will be out and about from August 1.
The author is nervous. There are ructions, internal, external.

Questions:
- is it all about the "second novel" syndrome?
- is it because the book is personal and this makes him fear almost any responses to it?
- is it because his partner has said she is not sure she wants to read it?
- is it normal writer-anxiety?
- is he only asking these questions to fulfil a blog commitment?

Here is a photograph of the author (right side of front row, on the end, almost cut in two), outside the Bank of New South Wales, Goroka, Papua New Guinea, 1968.
It's not the bank building, it's the building we lived in, the one we called the "bank mess". And it was a mess. 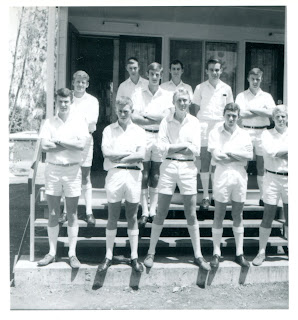 This book - To the Highlands - will be released for the lap in both forms: book and electronic.